Bath Rugby has announced a new coaching set up with the appointment of Todd Blackadder as Director of Rugby and Tabai Matson as Head Coach.

A former All Black captain, Blackadder has been in charge of the Super Rugby franchise the Crusaders since 2009, taking them to 4 Super Rugby semi-finals and 2 finals in that time. They have played some of the most attractive rugby in the competition under his stewardship, making the play-offs in all but one season.

One of the most highly regarded coaches in world rugby; Blackadder brings a wealth of experience to the role – having coached in Scotland and Tasman before taking up the Head Coach role at the Crusaders – together with a strong track record in the development of talented players and coaches.

One of the most highly regarded coaches in world rugby; Blackadder brings a wealth of experience to the role together with a strong track record in the development of talented players and coaches.

Tabai Matson has been central to the development of the Crusaders’ attacking style, and joins Bath having served as Blackadder’s assistant coach since 2013. A specialist attack and backs coach, Fijian Matson led Canterbury to their fifth consecutive ITM Cup as Head Coach in 2012. Since May 2015 he has been attack coach for the Fiji national side, including at last year’s Rugby World Cup.

Commenting on his move, Blackadder said: “I’m really looking forward to joining Bath – they are an ambitious club, with some very talented players. They play attacking rugby, and have a clear vision of where they want to be. Tabai and I are really excited to be part of that and to develop it further over the coming seasons.”

Matson added: “Both Todd and I are eagerly anticipating joining Bath, and linking up with Toby, Darren and Stuart as well as the squad and wider team. There is a lot of knowledge in the team and a great squad of players.  I can’t wait to link up with them and get started.” 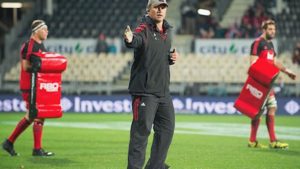 Blackadder and Matson, who will arrive in the next few weeks following the end of the 2016 Super Rugby campaign, will be supported by the current First Team Coaches – Toby Booth and Darren Edwards –  together with Stuart Hooper, with the trio continuing to run pre-season training in the meantime.

“We are delighted that Todd and Tabai will be joining the Club,” said Tarquin McDonald, Managing Director of Bath Rugby. “They bring a wealth of experience and provide a great fit for the club in terms of what we want to achieve on the pitch, the way we want to play, and our desire to develop home grown talent.

“They are both excited about the opportunity to help shape the Club’s future, and they will work very well alongside our current First Team Coaches, Toby Booth and Darren Edwards, and Stuart Hooper.”